Thank you to everyone who has fought over the last few years for freedom. To every blogger, every video maker, all the brave people who came out, recognized and endorsed Donald Trump as the leader we needed.

So many millions of people will never understand how close to the abyss we came. This election really was the difference between good and evil.

The mainstream media really did poison the minds of the electorate. They really did defend Hillary’s every evil deed and they really went after Donald Trump.

His strength and ability to brush off all the attacks is something to be admired. He is the leader we need right now and we wish him all the best.

I want to thank in particular groups that I have followed for a while now and whom I think really swayed the battle in our favor.

I would like to thank Alex Jones and Info Wars. He and his team have been called every name under the sun. Alex is such a great guy, very passionate. He comes across as a wild eyed conspiracy theorist, but at heart he is just a man looking for the truth, looking for answers. Thank you Alex.

To Stefan Molyneux. You are brilliant. Truly brilliant. The way you break things down and explain them is so intriguing. You have made some wonderful videos that carefully construct arguments for liberty and justice in a world full of falsehoods. Thank you Stephan.

To Ben Garrison. Sir, you are a brilliant artist. I said it back in 2012 when we were both supporting Ron Paul and were so disappointed in Mitt Romney. You and I each have been on a similar journey and both threw our support behind Donald Trump around the same time. Your cartoons so boldly showed how things really were and you weren’t afraid of shoving the hard truths in the faces of those who were committing evil. Thank you Ben.

To Sean Hannity. Sean I am so impressed with you. For this entire election cycle you did exactly what you set out to do. You fairly interviewed every candidate, gave them all the air time they needed. And then, when Trump gained enough of a majority of delegates, you stuck with him through thick and thin. Sean you deserve an award in journalism. You are one of the very few out there who was fair. Thank you Sean.

To the Breitbart News Network. When all the other major networks refused to accurately report, you gave us the articles where we could get accurate information. You deserve all the extra hits on your website. I am one of those who has added a lot to it. Thank you to the Breitbart team.

To Julian Assange. You sir are brilliant. You are so incredibly brave. I know you didn’t endorse Donald Trump, I know his election wasn’t your end game. But your bravery in exposing Hillary Clinton and her evil cohorts has just saved the world. You deserve the noble peace prize more than any other person in history.

To Project Veritas, to the protesters at Hillary’s rallies, to the homeless lady who guarded Trump’s star in Hollywood. To all the brave men and women who stood up in sole acts against tyranny to do what is right. Thank you.

To the old guard, to Rush Limbaugh, to those who have been in politics for a while and who endorsed Donald Trump early and took all the flak because of it. Thank you.

To my father-in-law who has written for years now in the face of great controversy. Thank you for being a role model for citizen journalism.

And thank you once again to Donald Trump. You had talked about possibly running for many years. You waited until the country could take the abuse no longer. Thank you Mr President Elect.

Thank you to all the people out there who have been diligently working behind the scenes. And thank you, thank you so much to everyone who was brave enough to vote for Donald Trump, in spite of all the negativity being thrown out there by friends and family who simply don’t know any better.

Thank you everyone. Thank yourselves. Celebrate. We have just saved this country and saved western civilization. We have saved the country and world from a potential war with Russia. We have exposed corruption on a level never seen before.

There is a lot of work to do in the months ahead. But for today, thank and congratulate yourselves. You deserve it.

Donald Trump has repeatedly said throughout his speeches that he wants to work for every American. He even detailed out a plan to go to the inner cities and improve education for predominately black and Hispanic communities. That doesn’t sound like someone who’s looking out only for white men.

It’s not about gender. Donald Trump employs many women within the Trump organization. He employed the first woman to be put in charge of building a skyscraper and his campaign manager is the first female to successfully run a GOP presidential campaign.

It shouldn’t be such a surprise that a republican win the white house after eight years of democrat control, just like it wasn’t a surprise that Barack Obama won after eight years of republican control under George Bush. After all, who didn’t want ‘hope and change’ after years of wars in the middle east? It is odd then, that any democrats supported Hillary Clinton at all, since she voted for the Iraq war, despite the democrats being the anti war party during the Bush years. So perhaps that plays a part in why she lost.

As far as the economy, bringing back jobs. Americans did not vote for Donald Trump for the things he said. They voted for him for what he has done. Donald Trump is a self made billionaire. After eight years of Barack Obama and a doubling of the national debt, people were sick and tired of it. People need jobs. People want a strong economy. People want education choice. People want lower taxes. Donald Trump has offered all of this. Hillary Clinton did not.

A song played at all of Trumps rallies sings true ‘you can’t always get what you want…but you might find you get what you need.’ America needs Trump right now, despite some of the silly things he has said. When you couple this with Hillary Clinton’s long list of scandals and investigations into her conduct throughout the years, it really shouldn’t surprise anyone that she lost.

So for those who are upset that he won, especially those who are making insinuations of death threats towards him. Knock it off. I’ll bet some of the things you’ve said about him in the last couple of days are far worse than anything he has ever said. We all say stupid things. No one is perfect. But democracy has played out and the American people have decided they want to give this man a chance. So do the decent thing, sit back, relax, breath for a second and watch what happens. I think you will be pleasantly surprised. 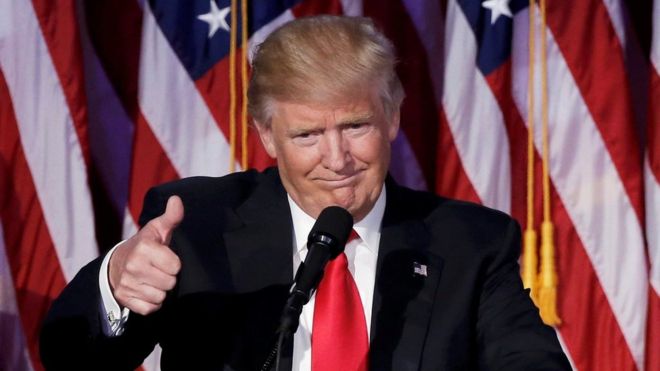 It has been a long road. The last few years have changed a lot of people. We’ve been through a lot.

Today there are many protesting the election of Donald Trump. They’re calling him every name under the sun. Let them. They are sore losers and they are wrong.

What we managed to achieve in electing Donald Trump to the presidency is a miracle. We managed to avoid civil conflict. We managed to peacefully elect a leader who respects the rule of law and obeys the constitution.

They will say that we would react the same way if Hillary had won. No we wouldn’t have. Had Hillary won many of us would be preparing for the onslaught of lawlessness by a corrupt leader and government. It is bitterly ironic that those on the left try to say Trump is Hitler, when it is the liberal party and the mainstream media which has colluded into a fascist like manner.

President elect Trump, you have fought for us, you have elevated our passions and concerns and broadcast them for the world to see. We already owe you a huge debt of gratitude for taking on the establishment the way that you have. There is a lot of work to be done and we believe you are the right man for the job. We wish you good luck and support your presidency. You have a great deal ahead of you and a very divided country to heal. We believe your platform will help to heal the wounds and bring peace and prosperity back to this great nation. May God bless you and your family as you take on this great and awesome responsibility as our new president.

I’ve listened to Stefan Molyneux for many years.

For the longest time I considered myself libertarian, just like Stefan did.

So why am I on board with Trump now?

Stefan’s video below adequately explains why.

Take a good hard look at the two major party candidates, and realize that the future of western civilization is at stake. 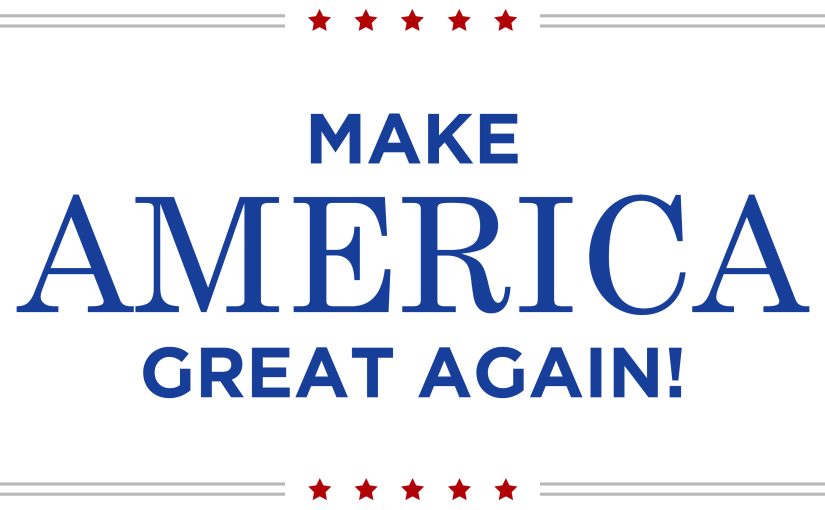 During the revolution a sign was put up ‘join or die’ that is a metaphor for today as much as it was back then. An imperfect band of rebels joined together to create this nation, and an imperfect band of disenfranchised Americans today, lead by an imperfect man are ready to restore this country to its former glory.

Pablo Escobar had a saying ‘plata o plomo’ which translates as ‘silver or lead’.

With Trump we get silver; liberty and prosperity. With Hillary we get lead; tyranny and oppression.

With Trump we get the rule of law. With Hillary we get graft and criminal enterprise.

With Trump we get success. With Hillary we get destruction.

With Trump we get the American dream. With Hillary we get an American nightmare.

Are you prepared for glory?

This fun little video actually illustrates quite well the difference between Donald Trump and all the other presidential candidates of the last three decades.

Do not allow the polls to dictate your decision to vote. The polls showing Trump losing were designed to suppress voter turn out. The polls now showing him winning are designed to make you relax and not worry about voting. Remember: every vote counts! Make sure your vote is recorded correctly. And make sure you take your friends and family along with you.

Get out and vote! Together we will make America great again!

One take away from the debates that was not discussed was that Donald Trump wore an American lapel pin through all three debates. Hillary Clinton did not.

Donald Trump addressed Hillary Clinton as Secretary Clinton. She in turn addressed him condescendingly as Donald.

Hillary called Mr Trump every name in the liberal play book, while he stated her corruption and lack of character.

So to the American people, who will you vote for? The rude, brash self made billionaire? Or the corrupt criminal politician?

Are you American? Do you believe in the constitution? You have to decide. It is now a pretty clear picture of who is pro America and who is not.

One of the candidates is pro America. The other is a corrupt globalist. The emails being released by wikileaks prove the level of corruption with the Clintons.

Do you want to see your country prosper or perish?

Hillary’s contempt for the regular American voter is vulgar and despicable.

We have a real chance right now to change history and to elect a pro America candidate who really will turn things around for the better.

You have to ask yourself the question. Am I american or not? And will I vote for the pro America candidate and help shape the country for the better for decades to come.

The choice is yours.