The propaganda in the United States is so thick, so rampant, so all consuming, that until you unplug yourself from the television, and disconnect from your previous assumptions  you will never awake to the reality that both parties are essentially the same, and that both presidential candidates are bought and paid for corporate stooges.

The whole idea that Barack Obama is a socialist is laughable at this point. I mean; so what? Sure he might be, sure his beliefs might lean that way, but who cares? Do you not think that Obama has been painted as a socialist, and Romney as a capitalist just to give the media talking points and to distract and divide the public? When you look at the numbers; Obama’s administration has been little more than a continuation of big government Bush era policies. When it comes down to it he is little more than a bought and paid puppet. By comparison; so is Mitt Romney. Neither candidate stands for freedoms or capitalism. Both are corporatists who crave money and power.

It truly is shocking to realize that both candidates are just pawns in a bigger chess game, and that the voting public are little more than mindless sheep who have been led to believe that there is a difference, and that if they don’t vote for the lesser of two evils; they will bring about an end to freedom. What they don’t realize is that by voting for the lesser of two evils in the past; they have brought about the end of freedom already.

Freedom is dead. You’d better wake up soon and start fighting for it, otherwise it will never come back. The fight for freedom goes far beyond party differences. You must wake from within first.

The following link is a transcript from a real presidential debate between Gary Johnson and Jill Stein: 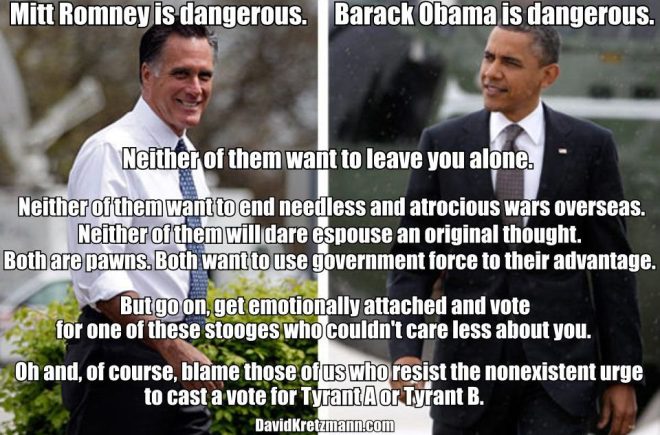 So while you’re watching the debate tonight just look to see if the two candidates talk about these things:

Balancing the budget in 2013

Restoring our civil liberties and freedoms

Repealing the patriot act, the NDAA act, the TSA and homeland security

Cutting out agencies that are needless and too expensive

Or how about just having a basic plan to balance the budget right now, instead of allowing a monetary collapse or a wider war in the middle east.

I doubt any of this will be covered. But go ahead and get upset at Obama for ignoring Romney, or annoyed at Mitt for not pushing Obama. They’re both sellouts and they don’t care about you, me, or this country. They care about money and power and nothing else.

So if you’re planning on watching the debate; try watching it from an unbiased viewpoint, with the constitution in mind, and you’ll soon see that everything going on right now from the contenders to the media is all a huge chess game with you and everyone else as a pawn. 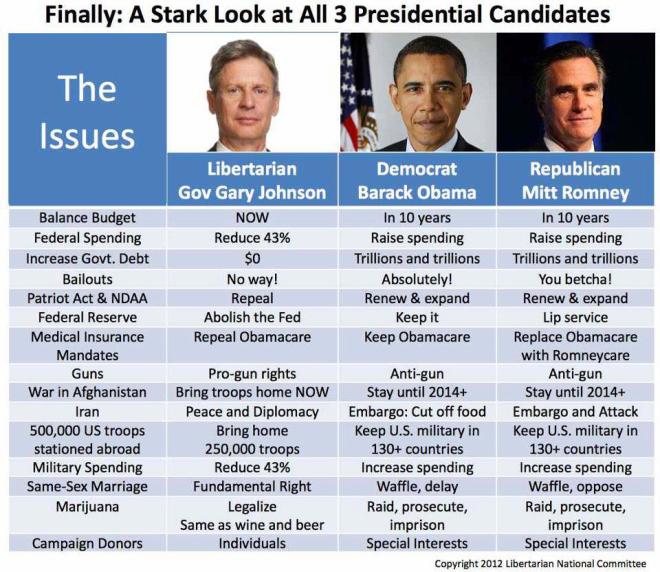