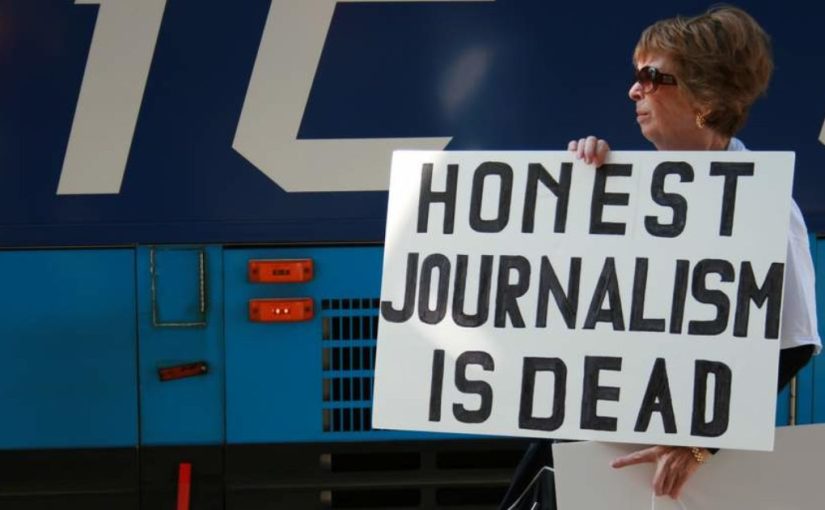 It is clear that the media cannot be trusted. This includes the mainstream media channels such as CNN, but also alternative channels such as the Blaze. They have shown their colors, and they have no interest in America as we know it.

You have the most corrupt candidate to ever seek the presidency, and all the media does is trash Trump. Now they are even fabricating groping stories to try and catch up to Bill and Hillary’s long list of affairs, rapes and cover-ups.

The hypocrisy is palpable.

The media is in full on attack mode as they trash Trump for any hint of lewd remarks, while giving a pass to other candidates past and present.

There is a video of Obama flashing an erection.

George Bush flipping off a camera.

John McCain cussing out a reporter.

And there are multiple accounts of Hillary cussing out law enforcement and secret service members.

The media is doing everything in its power to destroy trump. They are using anything and everything they can to trash him, while protecting Hillary from a bursting dam of lies and corruption.

Make no mistake about it, this is now war. We have a war going on right now to elect either a law and order president who will shake up the establishment and restore prosperity to this nation. And on the other side we have a corrupt to the core establishment candidate who will ensure this nation’s demise. In her own words she wants open borders.

Hillary Clinton is completely owned by the elites. She is totally controlled be special interests. She does not follow nor respect the law.

There is a war going on this election period. it is between the established globalists and free thinking Americans.

I find it sad and ironic that the UN human rights chief would weigh in on this election. His name is Zeid Ra’ad al-Hussein and he is from Jordan, a nation not exactly known for Human rights. Which shows the ineptitude of the UN itself that it would have a human rights chief from a country which struggles with it. This election is for Americans to decide, not a hypocritical globalist.

If it wasn’t for the internet itself, the media might be able to paint Trump into a corner, but with wiki-leaks releasing Hillary’s emails daily, and videos and evidence surfacing daily on the Clintons many scandals, a balance has at least been struck.

On one side you have the corrupt media holding Hillary up. On the other you have regular Americans exposing her for what she truly is. A fraud.

The closer you get to defeating a beast, the more viscous it gets. Expect Hillary and her media to get more and more viscous in their attacks on Trump, with more and more desperate and obscure ‘evidence’ of him being some sort of womanizer or sexist. The bitter irony being that she is married to one of the most famous womanizers on the planet, and indeed that she allowed and enabled it all to happen.

This war is one for the ages. It is an intellectual war. It is between free thinkers and free loaders. It is between the establishment and those who believe in liberty and the rule of law.

Will you believe the lies about Trump or the truths about Hillary?

This election is for you to decide. Choose wisely.