The support for Gary Johnson is growing. Even before Mitt Romney was officially nominated at the GOP convention, it was obvious to those not paying attention to the mainstream media, that Mitt Romney was going to lose the November election. Most liberty minded people, and many young voters, simply are not willing to vote for ‘the lesser of two evils’.

Here is a quote from ‘the real tea party’ facebook page:

Interesting……We keep hearing “Libertarians and Paul supporters are going to get Obama re-elected, just vote Romney.” Hey, there is a choice guys how about…….

“YOU JUST VOTE JOHNSON, you Romney supporters are going to get Obama re-elected.”

When Mitt Romney loses the election next month, the people who will complain the loudest will have only themselves to blame. 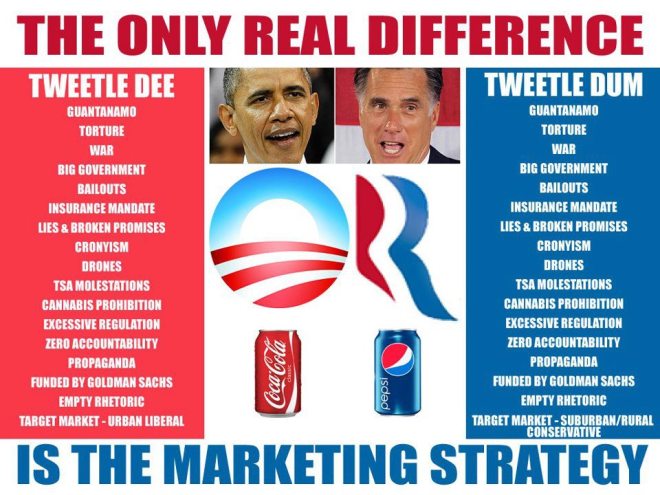 Even the most uneducated politicians know that you need to excite the youth to turn around a vote. Most of the older people are set in their ways. Do you really think the young people are excited to vote for Mitt Romney or Barack Obama? Do you really think we see a future for ourselves in either of these two sell-outs?

When all else fails, blame the Paulbots

You remember Ron Paul — that old Republican guy who ran for president. His non-interventionist foreign policy ideas were considered kooky during the Republican debates but have since landed him interviews on Fox.

He is the guy who barely cracked 10 percent in the primaries but managed to attract tens of thousands of people, from all walks of life, to his rallies during the primary season. People lined up to hear Paul speak about free-market economics and Constitutional government.

Yet his lively supporters were dismissed as “Paulbots” and “Paultards.”

But if breitbart.com, glennbeck.com, and others are correct, the Republican nominee, Mitt Romney, may have difficulty defeating Barack Obama if the Paulbots don’t fall in line and vote for Mitt.

Various commentators are pleading with the Paulians (and other libertarian and Constitutionally minded voters) not to split the vote and give Obama four more years.

I believe all voters should cast their vote for whomever they wish. But isn’t it curious that after being ignored by the media and abused by the GOP, the Paulians now are being courted (or harangued) because the GOP needs their support.

Based on comments on the Daily Paul, most Paulians won’t be swayed. They see the recent haranguing as evidence that, no matter what they do, Ron Paul and his supporters will be used as scapegoats if Mitt Romney — the man who has spent millions running for president for the last six years — manages to lose the election to a wholly incompetent incumbent.

One wonders: If Romney is the ideal moderate candidate who can attract hordes of independents to the GOP, why does he need the fringe Paulian/libertarian vote in order to win the presidency?

Until now, the media have ignored these “liberty” voters, presumably because they are a minority in the country. But now we discover that they are numerous enough to swing the election by sitting it out or voting third party.

If this is true, why hasn’t Romney vigorously tried to attract these voters?

If Romney loves the Constitution, as the Breitbart article suggests, why hasn’t he spoken against the detention provisions in the National Defense Authorization Act (NDAA)? Those provisions allow for American citizens to be detained indefinitely without trial, even on American soil.

The NDAA was approved by President Obama and the Congress. It harks back to the pre-Magna Carta era, circa 1215, when King John of England could throw anybody into a dungeon forever. The provisions have been denounced by civil libertarians, so why doesn’t Romney urge Congress to repeal them immediately?

The Paulians also want to end the corporate and banking bailouts. They want the Federal Reserve to be audited next year, as a first step, and eventually to be ended, so that its directors can no longer manipulate interest rates and devalue our currency by printing too much money.

Ron Paul’s “Audit the Fed” bill recently passed the House and is awaiting a vote in the Senate. Why doesn’t Romney publicly urge Sen. Harry Reid to allow a vote on the bill?

The Paulians want the TSA grope-fest at our nation’s airports stopped, and replaced by sensible security measures. They want the multi-trillion-dollar wars waged for the American Empire to be ended, and our Constitutional Republic to be restored posthaste.

I know Obama doesn’t espouse these views. When will Mitt Romney?

My husband and I, formerly unaffiliated voters, registered Republican, attended our precinct caucus, and voted for Ron Paul. We hung around to become delegates. We attended our county convention. My husband attended the district and state conventions in the spring, where he and other delegates voted in a slate (about half Paulian) to attend the national convention in Tampa in August.

An especially sore point for anyone who spent untold hours becoming a delegate was the GOP’s purge of many duly-elected Paul delegates in the weeks before the national convention. They disqualified them for various reasons, but mainly so they wouldn’t be so numerous as to cause a ruckus at the convention, or God forbid, try to nominate Ron Paul for president.

In Tampa, the Maine delegates walked out at one point because the GOP refused to seat half of Paul’s delegates from Maine. The state’s governor, a Romney supporter, boycotted the convention to express solidarity with the unseated delegates.

So Romney hasn’t exactly been “a uniter.”

Many Paulians remain in the GOP at various levels, working to inject into the party the principles of civil liberties, free markets, sound money, and a just foreign policy. They have taken over the state GOP in Iowa, Minnesota and Nevada, states where Ron Paul won the lion’s share of the delegates to the national convention.

These Paul-inspired activists are energetic, philosophically consistent and mostly young.

If they succeed in reshaping the GOP into Ron Paul’s image in the years to come, they will have paid the dismissive GOP leaders — and the pundits — a most deserved comeuppance.

During the primaries, there was one man who stood out, who could truly save the republic, and yet he and his followers, constitutionalists all, were shunned. Now that Mitt Romney is the nominee, all of a sudden, those who did the shunning, want our support.

Sorry, but our integrity and our principles are more important than that.

If you choose evil, you will get evil. 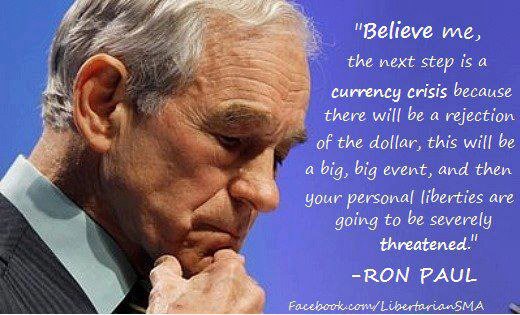 We will be the future, the two party system is the past. 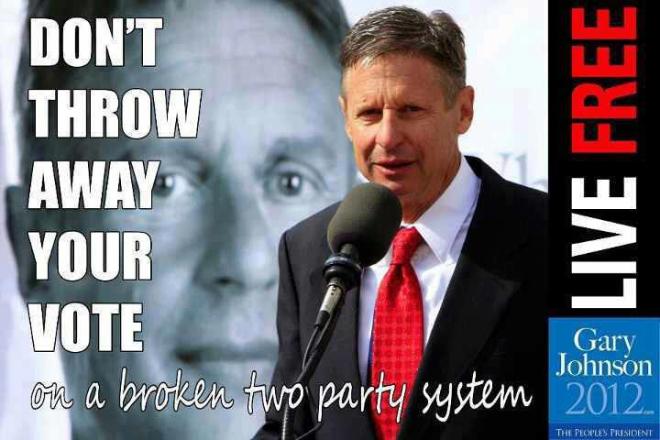 Gary Johnson already has 10% of the vote in Ohio, a crucial swing state. If you want to change the republic, if you want to turn this country around, then defend it by voting for principles. If you choose ‘the lesser of two evils’, don’t go blaming those of us who are ahead of the curve and leading the way of being the cause of all the problems. We have already advanced passed the left vs right paradigm, and we see the corruption and the state of things for what they are. The libertarians, the independents, the fiscal conservatives, the anti-war liberals, all of us were prepared to vote for Ron Paul under the republican banner, but we were shunned. The special interests are as strong on the right as they are on the left. This country will not be saved by another Obama term or a Romney term. It will be saved from the inside out by individuals like you and me.

The republic will be saved by individual groups such as the Tea Parties, the libertarian groups, and all the people who are fed up with the broken two party system. County by county, state by state, we will fix this country, we will reject the corruption, we will restore this nation.

We are the future. Come join us.

2 thoughts on “You are the problem, we are the solution”