Seven votes are all that stood between Britain and America firing cruise missiles at Syria Thursday night. Only seven people made up the difference that stopped World War III from starting in the middle east.

BREAKING NEWS
The UK government has lost the vote on Syria by 285 votes to 272.

Now the ball is in our court. Call you representative, put pressure on Obama. Unless a country posses an imminent threat to the US, the president cannot start a war with another country. This president has already performed multiple impeachable offences. Let’s put the fire to his feet and begin the process of chasing him out of office.

2237: Well, just what are the implications of Parliament’s rejection of the the US position?According to the Times: “President Obama cannot launch a military strike against Syria without British support, military and intelligence experts in the US said last night.” 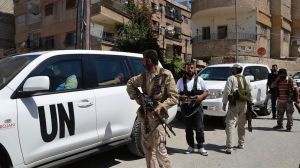 While I applaud my home nation for denying the war mongers their chance at starting World War III, we must remember that we are not out of hot water yet. There are many false flag scenarios that could easily come into play. There could be more chemical attacks by the rebels and blamed on the Syrian government, and there could even be a false flag attack on one of our ships in the Mediterranean. Watch out also for more cyber warfare stories.

Even Donald Rumsfeld says Obama has not justified attack on Syria: Architect of Iraq war expresses fears over intervention as President comes under pressure from Congress

Keep your eyes peeled, and don’t lay off the pressure on your representatives. Street movements in England, and the calling up of members of parliament was just enough to prevent the UK from authorizing deadly force against the Assad regime.