There is so much wrong with socialism that it would be impossible to explain all the details as to how it led to the French massacre in one article. There are three brief points however, that I do want to make with this article.

I’ve written about Gun Control before, and how it only disarms the victims. Those countries without gun control have the lowest crime rates, while those with the tightest gun control only ever see a rise in violent crime. Not only could the workers at Charlie Hebdo not carry weapons, knowing full well that their lives were threatened by Islamic extremists, but even the poor police officer who tried to help was powerless because he too did not have a weapon. Had he been issued a pistol, he could have returned fire on these terrorists, instead of laying there, pleading for his life, before being mercilessly executed.

The idea that all are welcome, and do not need to show anything for it. When I emigrated to the US, I took the steps to becoming a citizen. After swearing my oath of allegiance, I did everything I could to guard that oath, to protect and defend the US  Constitution. I did everything I could, and still do, to blend in and to participate in American society. I try to make American values my own. I try to live up to the founding fathers vision. Do you think the Islamic terrorists, who themselves were French citizens, tried to live up to French values? Did they try to fit in? Did they try to participate in French society? Their actions show that they did none of this.

It is sickening to hear the mostly leftist media trying to cover for the Muslims. It is shocking to see that they are more concerned with back lash against Muslims, than upset with the brutal murder of innocent people. It is ludicrous to compare these atrocities to a lawsuit from the 1980’s.

There is a problem in Europe, and particularly in France with a Muslim population growing within their country. The problem is not the Muslims themselves, but the extreme faction within their religion, which has been allowed to percolate because politicians and left wing media alike do not want to call the pot black, and tell the truth.

If It hadn’t been for gun control, immigration without assimilation, and political correctness, these attacks would likely not have happened at all.

I hope that the French people can throw off the shackles of socialism, and pacify the radical Islamists in their country without turning to violence.

Lower taxes, increased gun rights, and better integration of immigrants would go a long way to solving their problems.

It is a sad week for France. My thoughts go out to all the families who lost loved ones by the acts of these barbarous Islamic terrorists. 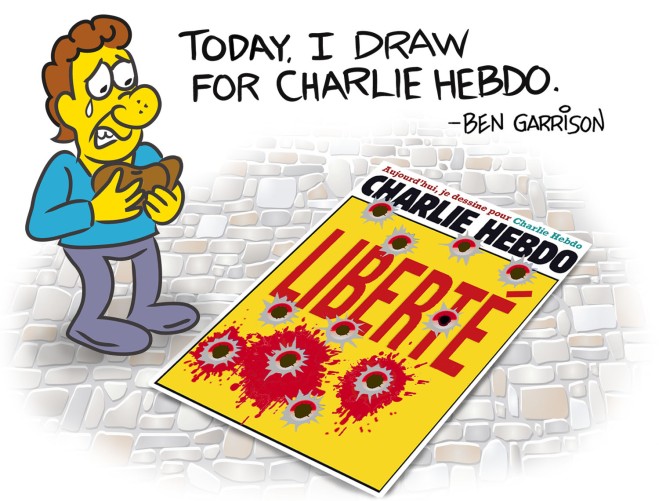 To any French readers out there: