Another tragedy befalls the United States of America, another mass shooting on home territory. While many are shocked and horrified by these events, it does not surprise me. I am sad at the deaths of the innocent young children, it is thoroughly disgusting that these innocent young beings are made to suffer. But I am not shocked, I am not surprised, and I am not going to be part of the knee jerk crowd who ask the benevolent hand of government for more regulations and control to make me feel better about it, in fact quite the opposite would be appropriate.

The media parade death like some horrific spectator sport, and concentrate only on the killer and the tally of death caused. They speculate on government interference of firearms rights, and yet do not look deep into what caused the nasty human being to snap in the first place. Instead they ask the question ‘what would cause a person to do this?’ and then go back to their speculation and death count.

All the while this is going on, we continue to ignore the mass murder our nation commits every week under the guise of ‘fighting terrorism’. How many thousands of young children have to die in other nations until we are satisfied? 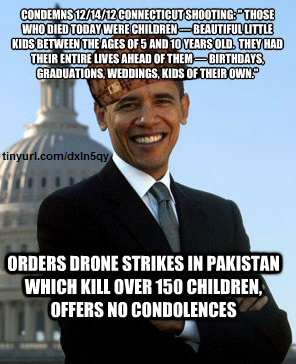 It is tragic that these young children were killed last Friday, and I morn for their deaths, as I morn for the deaths of all innocent children murdered all over the world. But it will not surprise me as this continues to happen until we change our thought process and habits, until we stop our murderous rampage all over the middle east, and until we decide to concentrate our spare time on constructive games and past times, instead of violent movies and vicious video games. Nothing will change until we reject violent government regimes, including our own. Nothing will change until we grow up and decide that we are best off defending ourselves as individuals instead of asking government to do it for us, whether it be at home or abroad.

Because the fact of the matter is, it doesn’t matter if it is a bunch of sweet young kids in Connecticut, or a village of small families in Pakistan; murder is murder; plain and simple; and it is quite unacceptable.

4 thoughts on “Murder plain and simple”